“Holocaust by Bullets” from Nazareth College

Last Saturday morning about forty of us gathered — without one man, “Joe,” who wanted to be there but could not — in Nazareth College’s Fine Arts Building. (more on Joe below)

We watched a presentation on the trials, tribulations and triumphs of a pilot course: Holocaust by Bullets: Understanding the Holocaust and Mass Crimes to Prevent Daily Violence. Quite impressively, the class had researched and thoughtfully considered issues of mass violence and genocide. Working closely with community members, the class complied ethnographies and created a truly remarkable website Witnessing for Peace that will be an invaluable resource for others following similar paths.

As an introduction to Witnessing for Peace, Professor Susan Nowak provides an overview of the pilot course and its purposes — and her own deeply felt experience:

There are moments in everyone’s teaching career that are “special;” those times when class material, student interest, and community participation coalesce into something that surpasses the teacher’s hopes and dreams. I am always grateful when I have had even a glimmer of such a synergy by a semester’s end. This semester marks an experience I never really expected. It has been a time when the dynamism of that synergy permeated each and every class meeting and taught each of us more than we had ever dared think possible. The course title might give you a hint that something intense is about to happen: “Holocaust by Bullets: Understanding the Holocaust and Mass Crimes to Prevent Daily Violence.” The name of the course co-lecturer sparks even greater anticipation: Fr. Patrick Desbois, founder of Yahad-In Unum, author of the award winning book, “Holocaust by Bullets,” that traces his journey across Eastern Europe to recover the stories of the Jews who were abandoned and murdered during WWII.

Bring into the picture 12 highly motivated student leaders working with four dedicated community representatives, each a survivor of mass violence or genocide, and you have every right to believe that the dream might just come true.

What you read in this blog is a testimony to what students will confront and engage when their passion to create a different world is brought into collaboration with four resilient individuals who have created lives of meaning and purpose despite experiences of suffering and trauma that would have silenced and defeated many of us. The course time frame was the usual 15 weeks. But those 15 weeks were filled with more than a lifetime of experience times four. They were shaped by survivors sharing their individual stories with our students and students trying to process the complexity of mass violence as experienced by Jews, African Americans, Native Americans, and Iraqi refugees.

Every week students were challenged to analyze more fully the moral, religious, and spiritual implications of each survivor’s experiences. The second half of the class pushed the students to evaluate more carefully the nexus of factors that play causative roles in the perpetration of human cruelty and mass murder on an individual and collective basis. Towards the end of the course the students began to tackle in earnest what are probably the toughest questions of all: Is it possible to prevent mass violence and genocide? And if yes, how?

At the presentation, as we were taken by the passion and commitment of the students, we were also moved by the regrettable absence of one of the primary participants: “Joe.” When hearing that one of the four community members could not attend, I assumed a scheduling conflict.

During the presentation and after, however, we learned that Joe was an Iraqi man who had worked as a translator during the war and came to the United States after our troops left. Here in Rochester, Joe feels compelled to tell his story and the story of his people.

At the same time, Joe very legitimately fears if it became known he was involved in the project, his family members still in Iraq might easily face recriminations. The wounds of war go deep in Iraq.

To protect his identity, his real name was not used. Nor any images of him.  Unlike the others, Joe’s story appears as a written transcript rather than in an audio version containing his voice.

from the Personal Reflection section of Joe’s story

One student in Joe’s group offered a Personal Reflection:

Personal connections to trauma make an issue much more impactful. Knowing someone chips off the veneer of humanitarianism and righteous indignation and leaves behind the tarnished reality. It is important not to glamorize the struggles of the individual—do not take their experiences as the uniform experiences of a whole group. Instead, use these connections as a way to ignite empathy and work for change. Those of us who are privileged should use our privilege for change. Standing behind a chipped and tarnished reality in all of its imperfections, grotesque as it may be, is a powerful way to change the status quo. But privilege must come with mindfulness and empathy. Be respectful of others; their pain and their boundaries, and never speak for them, but simply advocate so that they may raise their own voices.

The student’s reflection is testament to the power of Joe’s courage. He has nothing to gain and something to lose by bearing witness to events he might prefer to forget. But Joe firmly believes if some hear his story, even if not his actual voice, the chances are that much better that history will not be repeated.

Another student, Lauren Beeles, drew inspiration from an interview in which Joe shared a story from his childhood:

A World of Difference

And, we never want to forget Dr. David Anderson, a visiting community scholar of Nazareth College, who, fittingly, was one of the four community members. Working in collaboration with students Angela Tona, Hannah Mang, and Brittany Smith, David sheds light upon his experiences as an African American living in the systemically racist society of Rochester, N.Y. Angela, Hannah, and Brittany express great gratitude toward Dr. Anderson for sharing with them his life story and passion for building a more socially just world.

Included is a Final Reflection from David’s group

Finally, the evening before the presentation several members of class visited the Islamic Center on Westfall Road in Brighton to build solidarity and, to a degree — as Sabrina Squires said at the presentation — to counteract Donald Trump’s ugly idea to ban Muslims from entering the United States.  Sabrina describes the evening:

The cake at the Islamic Center

Recently, several Nazareth College students and faculty members attended a Jummah worship service at the Islamic Center in Brighton. This act was not a class requirement. Nor was it an attempt to gain publicity for the college. This was nothing more than a heartfelt demonstration of solidarity. This was the way we professed our determined resistance to hate. It was a loud cry to our Muslim brothers and sisters; a cry that professed these truths: We are not afraid. We will not give in to fear and discrimination. We see your pain, and so we will come and carry this hurt with you. We will stand in worship beside you, we will serve you cake, and we will let you know that you are not alone in a world that wants to ostracize and characterize you as violent terrorists. We did not come for recognition. We came because we knew it was the right thing to do.

“If we have no peace, it is because we have forgotten that we belong to each other.”

One of the community participants Lauren Jimerson,

a member of the Seneca tribe (see article on the Haudenosaunee Days), will be a graduate student in Nazareth’s Department of Art Therapy (also below).  And, a while back, I wrote about a visit Henry Silberstern and others made to the School Without Walls.

More on Nazareth below. (pics and links).

Holocaust survivors tell their story at the School Without Walls

Nazareth College’s Daan Braveman on defining moments and his own March on Washington, August 1963

A pilgrimage of peace from Palmyra to Pittsford

At the 2015 World’s Parliament of Religions in Salt Lake City with Nazareth College’s Dr. Muhammad Shafiq

And on how college students are helping Syrian refugees

Marie Kondō, can you green up your act? By Leslie Kramer 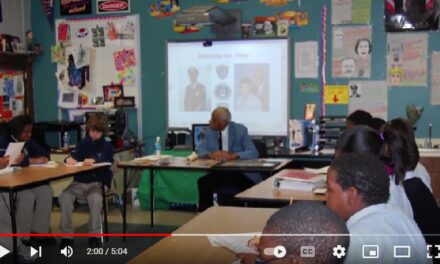 Looking at “1964″ across the generations at World of Inquiry