The Masks of Eternity: a montage on the art of idolatry

In Burned Over: on the search for some of Rochester’s most sacred Christian sites, George captures some of the Christian history of Rochester from the period of the burned-over district to today.

Here, George extends his exploration of religious meaning and its complexities with:

The Masks of Eternity: a montage on the art of idolatry (including links to related articles and images by George and others)

You can safely assume you’ve created God in your own image when it turns out that God hates all the same people you do.
― Anne Lamott

In Hinduism, a murti  typically refers to an image that expresses a Divine Spirit (murta). Meaning literally “embodiment”, a murti is a representation of a divinity, made usually of stone, wood, or metal, which serves as a means through which a divinity may be worshiped.  Hindus consider a murti worthy of serving as a focus of divine worship only after the divine is invoked in it for the purpose of offering worship.  The depiction of the divinity must reflect the gestures and proportions outlined in religious tradition.

see The birth of American democracy and the enduring political wisdom of the Six Nations Iroquois Confederacy.

I inquired what wickedness is, and I didn’t find a substance, but a perversity of will twisted away from the highest substance – You oh God – towards inferior things, rejecting its own inner life and swelling with external matter.”
― Augustine of Hippo, Confessions

You can’t, if you can’t feel it, if it never
Rises from the soul, and sways
The heart of every single hearer,
With deepest power, in simple ways.
You’ll sit forever, gluing things together,
Cooking up a stew from other’s scraps,
Blowing on a miserable fire,
Made from your heap of dying ash.

Let apes and children praise your art,
If their admiration’s to your taste,
But you’ll never speak from heart to heart,
Unless it rises up from your heart’s space.
― Johann Wolfgang von Goethe, Faust: First Part

see Sadly, there will be no “Happy Ending” in Highland Park this time

If God created us in his own image, we have more than reciprocated.

The denigration of those we love always detaches us from them in some degree. Never touch your idols: the gilding will stick to your fingers.
― Gustave Flaubert, Madame Bovary

see Touring Hawkeye: An Inside Look at Kodak’s Most Enigmatic Landmark

I was in misery, and misery is the state of every soul overcome by friendship with mortal things and lacerated when they are lost. Then the soul becomes aware of the misery which is its actual condition even before it loses them.”
― Augustine of Hippo, Confessions

We always pay dearly for chasing after what is cheap.
― Aleksandr Solzhenitsyn

Ye shall make you no idols nor graven image, neither rear you up a standing image, neither shall ye set up any image of stone in your land, to bow down unto it: for I am the Lord your God. —Leviticus 26:1
see Niagara Noir

“Your god, sir, is the World. In my eyes, you, too, if not an infidel, are an idolater. I conceive that you ignorantly worship: in all things you appear to me too superstitious. Sir, your god, your great Bel, your fish-tailed Dagon, rises before me as a demon. You, and such as you, have raised him to a throne, put on him a crown, given him a sceptre. Behold how hideously he governs! See him busied at the work he likes best — making marriages. He binds the young to the old, the strong to the imbecile. He stretches out the arm of Mezentius and fetters the dead to the living. In his realm there is hatred — secret hatred: there is disgust — unspoken disgust: there is treachery — family treachery: there is vice — deep, deadly, domestic vice. In his dominions, children grow unloving between parents who have never loved: infants are nursed on deception from their very birth: they are reared in an atmosphere corrupt with lies … All that surrounds him hastens to decay: all declines and degenerates under his sceptre. Your god is a masked Death.”
― Charlotte Brontë, Shirley 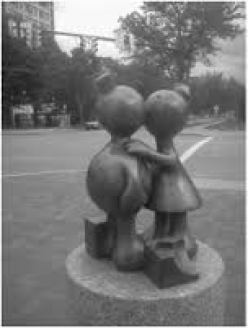 The tiny Lilliputians surmise that Gulliver’s watch may be his god, because it is that which, he admits, he seldom does anything without consulting.
― Jonathan Swift, Gulliver’s Travels

Whatever your heart clings to and confides in, that is really your God, your functional savior.
― Martin Luther

“This is the even-handed dealing of the world!” he said. “There is nothing on which it is so hard as poverty; and there is nothing it professes to condemn with such severity as the pursuit of wealth!”
― Charles Dickens, A Christmas Carol

Forms of idolatry include:

Fetishism, or the worship of trees, rivers, hills, stones, etc.

Nature worship, the worship of the sun, moon, and stars, as the supposed powers of nature.

Hero worship, the worship of deceased ancestors, or of heroes.

from A natural history of sex magic from Dr. Eubie

see A natural history of sex magic from Dr. Eubie

graffiti art on one of the abandoned water towers in Washington Grove, Cobb’s Hill 11/19/16 [Photo: David Kramer] see 172 years ago when the Millerites trudged down Cobb’s Hill

see A World Heritage Site in our Backyard: preserving and profiting from the history, culture, and ecology of the Lower Falls Gorge

Everyone should be respected as an individual, but no one idolized.
― Albert Einstein, Einstein on Politics: His Private Thoughts and Public Stands on Nationalism, Zionism, War, Peace and the Bomb

The avoidance of the use of images for religious reasons is called aniconism. The destruction of religious images within a culture is called iconoclasm, of which there have been many major episodes in history.

A face seen passing in a crowded street,
A voice heard singing music, large and free;
And from that moment life is changed, and we
Become of more heroic temper, meet
To freely ask and give, a man complete
Radiant because of faith, we dare to be
What Nature meant us. Brave idolatry
Which can conceive a hero! No deceit,
No knowledge taught by unrelenting years,
Can quench this fierce, untamable desire.
We know that what we long for once achieved
Will cease to satisfy. Be still our fears;
If what we worship fail us, still the fire
Burns on, and it is much to have believed.

A natural history of sex magic from Dr. Eubie

A portrait of a Rochester artist (Alex Hillis) at the Greenhouse Café. And a few minutes of South Wedge night life.