Recently, George has shown how the proposed site is imprinted with the work and visions of Frederick Douglass, Seth Green, perhaps American’s most important fisherman and Frederick Law Olmsted.

from Celebrating the roses of Maplewood. But like Sam Patch, Talker is Gorged

Today, George takes us through one of the centerpieces of the proposed World Heritage Site: Maplewood Park.

Earlier in the year, Austin Retzlaff wrote about a tour of the lower falls that George offers to the public. And Dean described Talker‘s untimely demise when lost underwater in the rocks below the falls.

According to the Rochester City website, Maplewood Park is located in the northwest quadrant of the city, and is one of two original parks laid out by Frederick Law Olmsted to highlight the Genesee River. 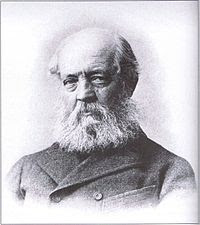 The “Emerald Necklace” of Parks

On the City’s website it is keen to signify that Rochester’s park system owes a great debt to Frederick Law Olmsted (April 26, 1822 – August 28, 1903), often called the father of American landscape architecture. “Rochester is fortunate to be one of a handful of American cities that have a park system designed by the most revered landscape architect in American history…After he was hired by the City’s first Parks Commission in 1888 to turn generous donations of land into an exceptional urban park system, Olmsted immediately focused on Rochester’s gorgeous waterways. He continually urged City leaders to concentrate on acquiring land along the Genesee River, with the goal of preserving its varied scenery from industrial development. Olmsted’s designs took advantage of the diverse landscape effects created by the river’s course through the city, from the rolling topography south of downtown, which he called a “nearly ideal” site in which to realize his vision of a “pastoral” landscape, to the steep rugged gorge banks to the north, where he envisioned a park in his “picturesque” style. He designed what he called an “emerald necklace” of parks and gardens along the Genesee River, from the Erie Canal to Lake Ontario.”

For more information about Olmsted see:

But without question the star of this park is the internationally acclaimed Rose Garden, which was added to the park after Olmsted’s death in 1903. “Located off Driving Park Ave., the Rose Garden features more than 3,000 rose bushes that include everything from the antique “Malmaison” to the recently-created hybrid “Princess Diana.” The roses fill infuse an acre of land with their fragrant scent and bold colors from early June until nearly Thanksgiving. Outside the rose season, the garden features bulbs, peonies, perennials, and evergreens.”

The website goes on to state that the initial open area you enter was known as the Maple Grove. “It contained a beer garden and picnic area and was owned by Ellwanger, Barry. et al. They also established a resort, the Glen House(1870), on the river directly below the Maple Grove and in 1878 added a hydraulic elevator for easier access.”

In fact, From 1870 to 1890 this was a major recreation area for Rochester. “People would hike, view the falls, dine, dance, attend concerts, rent boats, fish and take excursion boats to Lake Ontario. The Glen House burned in in 1894 and in 1904 both properties became part of the Rochester park system. This park was designed by the firm of Olmsted Brothers and one of their 1904 plans shows a rose garden in the same area as the present garden. The 1909 Report of the Parks Commission states “nine varieties of the hardiest and the best roses have been planted in large masses. Each variety of roses is separated from the others by a number of white roses so that their colors will not be 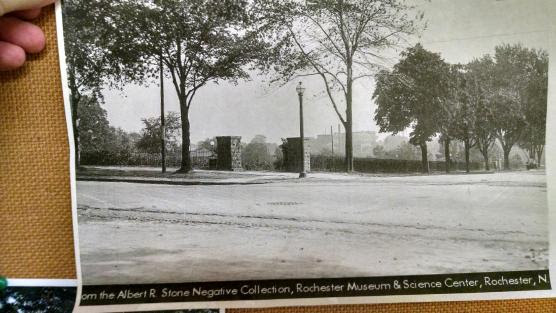 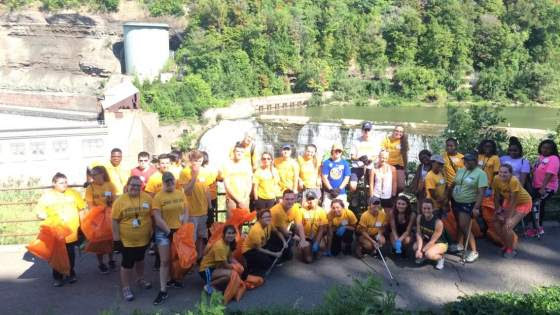 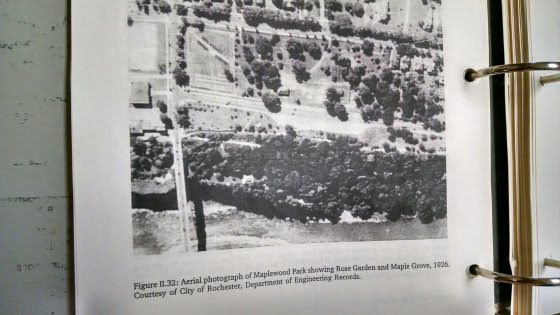 Aerial photograph of Maplewood Park when it still had a Maple Grove in 1926. 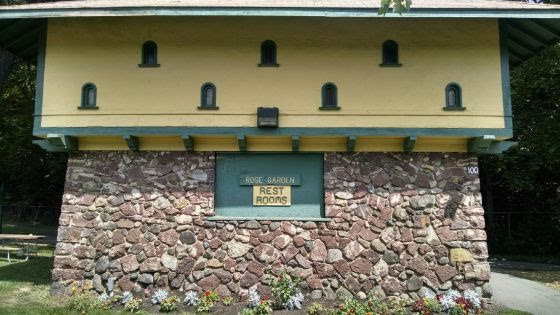 This structure (above) is a giant birdhouse. Actually, according to RochesterSubway.com  it is referred to as a dovecote. The formation is intended to resemble a military fortress or “blockhouse.” 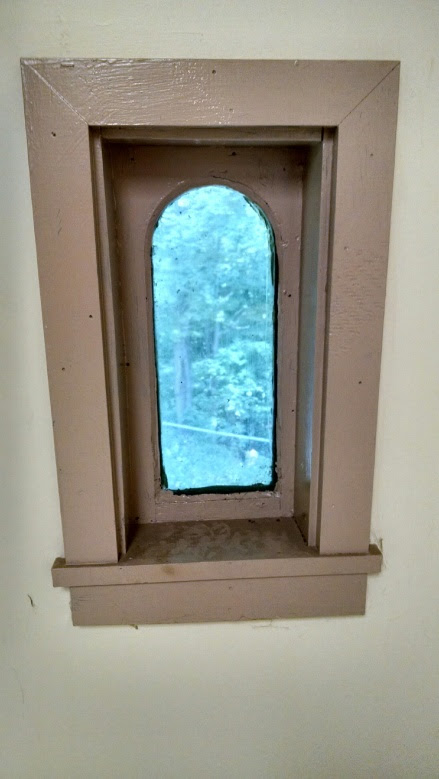 Window in the Maplewood Dove Cote 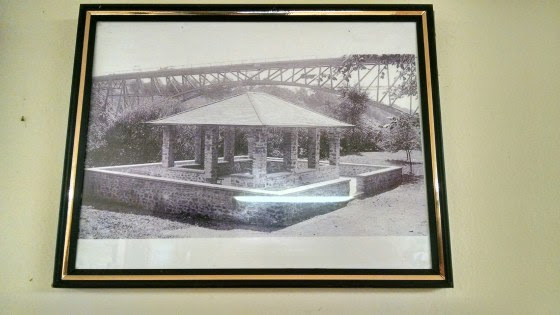 Glen House Pavilion when it was in its prime

“On June 15, 1958 the Stecher Memorial Fountain honoring the late Frank A. Stecher was dedicated in Maplewood Park at 2:30 p.m. during the Rose Garden ceremonies.

“The fountain, made of Etowah pink Georgia marble, was presented to the city by Mrs. George C. Schlegel of 1132 East Ave., daughter of Mr. Stecher, founder of the Stecher Lithograph Company. Mayor Peter Barry accepted the $2,000 structure on behalf of the city. 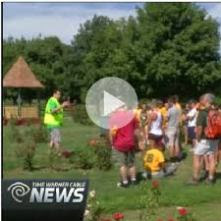 Leading a lesson about Maplewood Park

The marble used in the fountain came from one of the first marble quarries of North Georgia. Etowah is a Cherokee Indian word meaning “red sunset”. The choice of marble was thus quite appropriate, relating both the theme of roses and the fact that the Maplewood Park area was an important Indian site.

Mr. Stecher, a native of Germany, came to Rochester in 1870, and was the first American to organize a lithograph company in Japan. He was the first lithographer to use a two-color offset press. Stecher was thus an early pioneer of imaging technology, a Rochester tradition. Mr. Stecher was a director of several banks and a director of the Rochester Dental Dispensary. In 1906 he organized the National Association of Employing Lithographers, and was its president for three terms. He died in 1916.” 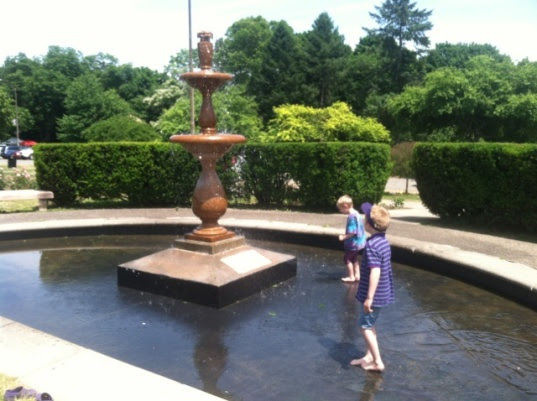 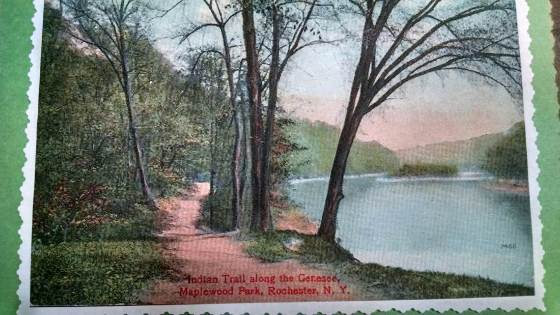 The Seneca are a group of Iroquoian-speaking people native to North America who historically lived south of Lake Ontario. They were the nation located farthest to the west within the Six Nations (Haudenosaunee) in New York before the Revolution.

In the 21st century, more than 10,000 Seneca live in the United States, which has three Seneca tribes. Two are in New York: the Seneca Nation of New York, with two reservations in western New York near Buffalo, and the Tonawanda Band of Seneca Native Americans. The Seneca-Cayuga Nation is located in Oklahoma, where their ancestors were relocated from Ohio during Indian Removal. Approximately 1,000 Seneca live in Canada at the Six Nations of the Grand River First Nation. They are descendants of Seneca who resettled there after the American Revolution, as they had been allies of the British and forced to cede much of their lands. 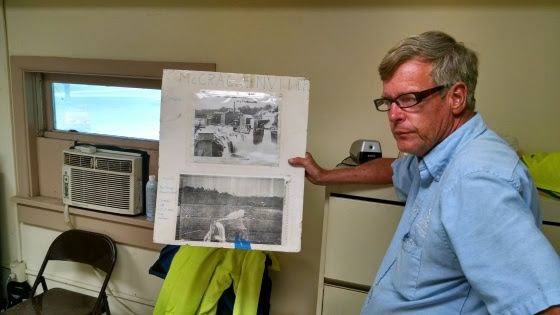 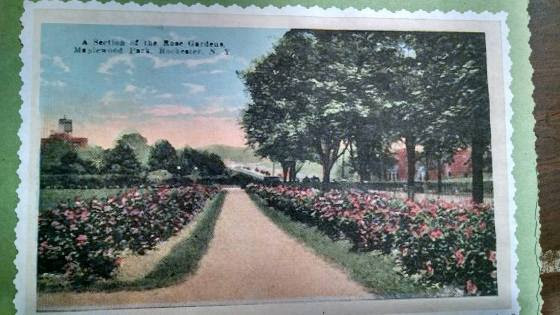 A section of the Maplewood Rose Garden. (Date not listed) The Rose Garden in June

From Celebrating the roses of Maplewood. But like Sam Patch, Talker is Gorged

see Celebrating the roses of Maplewood. But like Sam Patch, Talker is Gorged 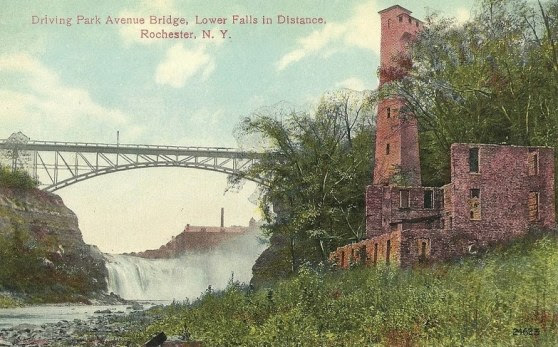 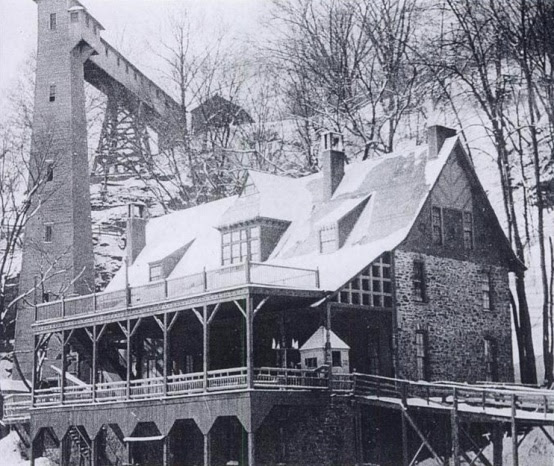 The Glen House in its prime 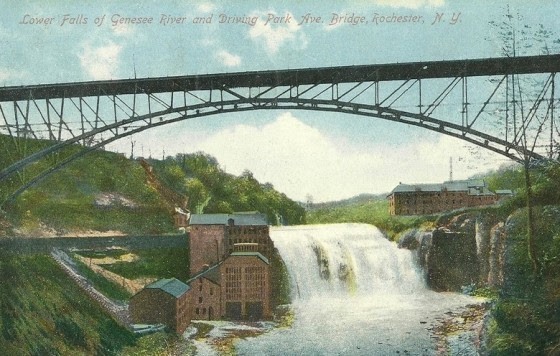 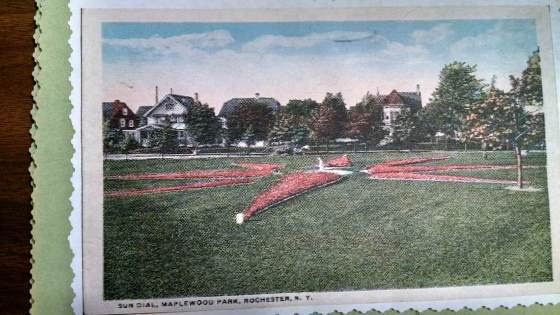 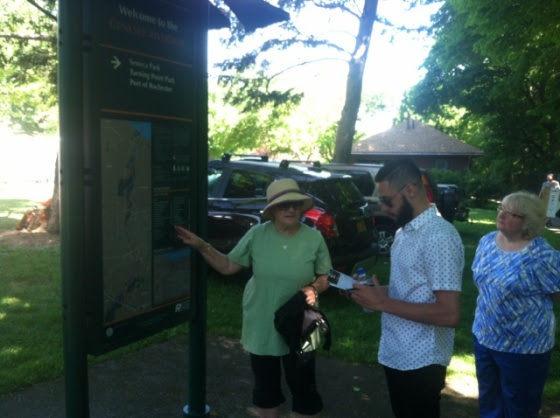 Frederick Law Olmsted experts still give tours in the park

The second half of the 19th century witnessed the development of elegant farming estates and palatial houses along Lake Avenue. The area became a popular recreational site with side-wheeled steamboat excursions up the Genesee to the Glen House (1870) situated on the west bank just north of the Lower Falls, a “Hydropathic” spa and resort (1852) on Lorimor (Burke) Hill, occupied today by Nazareth Academy, and the opening of the Driving Park Race Track (1874). 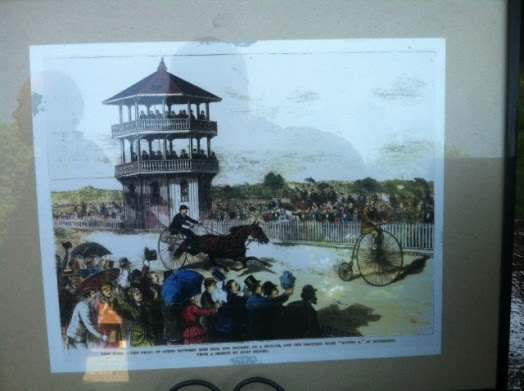 Many thanks to local historian Bob Stevenson for making these historical documents available. Many of the photos of photos were taken at this year’s Maplewood Rose Festival in June.

Hike to Rico’s Cave: An Experience Of “Two Rochesters” by Austin Retzlaff

Celebrating the roses of Maplewood. But like Sam Patch, Talker is Gorged

Are nuns members of the working class?: Geva’s “Sister Act”

Rundelania publishes “Providence, Summer, 1989,” “The Thirty Year Prophecy,” and “A Period of Mutually Agreed Upon Reflection”