Nazareth College was founded in 1924 by the Sisters of St. Joseph [Photos by George Payne]

As seen in “Many different paths to restoration” and  Rethreading the Web: Catherine Keller and the Theology of Entangled Difference, in 2016 George Cassidy Payne and I reported on Nazareth College’s annual Sacred Texts and Human Contexts: Symposium on Nature and Environment in World Religions.

2016. From “Many different paths to restoration”

On July 29, I went to Nazareth College in Rochester, New York, to attend the opening session of the 2018 Sacred Texts and Human Contexts Conference. While there, I was privileged to assist Dr. Muhammad Shafiq, executive director of the Hickey Center for Interfaith Studies and Dialogue (and co-author of Interfaith Dialogue: A Guide for Muslims). In addition to volunteering for an organization I deeply admire, I had been anticipating for weeks the keynote address by Bruce Hoffman, a highly touted expert on global terrorism.

Hoffman did not let his audience down. His address was rigorously explicated, politically insightful, and mentally challenging. Using multiple case studies, historical incidents, factual reporting, and geopolitical and sociological analysis, Hoffman explained how most people living in Western democracies do not understand the evolving landscape of contemporary terrorism. Without coming across as demeaning or intentionally dense, he worked through his thesis in a way that was both informative and digestible. 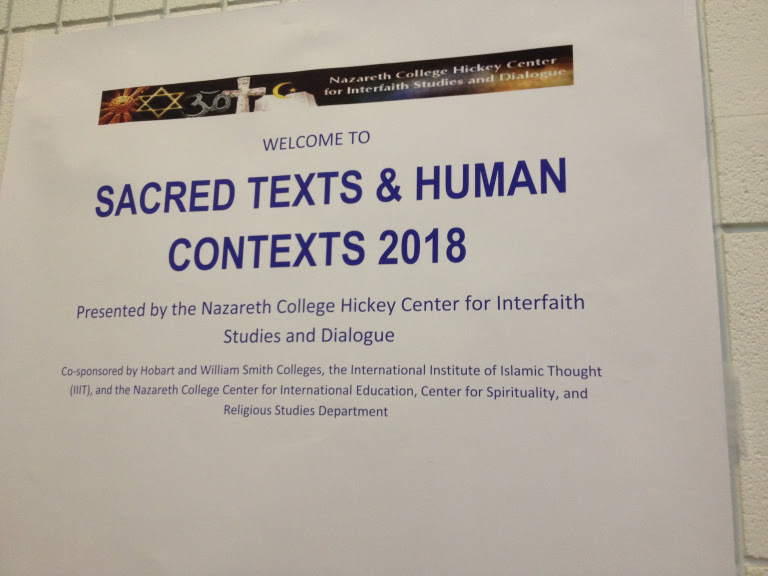 One piece that most people do not grasp about groups such as al-Qaida and ISIS (a.k.a. the Islamic State) is how effective they are at using technologies such as Twitter, Facebook, apps with and without encryption, as well as targeted marketing to export a brand for international appeal. As a result, these groups have spread well beyond Iraq and Afghanistan to places such as Yemen, Mali, Niger, Turkey, Syria, the U.K., and even the United States. Their brand is gruesome, wanton violence, and it is becoming more accessible and comprehensible every day.

Hoffman also pointed out that most people do not understand that these organizations are extremely cunning. In Yemen, for example, the terrorist organization al-Shabaab has recently placed a ban on plastic bags as a way to appear concerned about the nation’s ecology. By doing so, they are able to reach new and larger audiences. Always expanding their consumer base, these groups have the ability to withstand major losses on the battlefield, yet continue to grow in numbers and power. In fact, only a small contingent of enlisted al-Qaida armed forces still exists in Afghanistan and Iraq; yet the overall army is 30,000 strong, with 4,000 in Yemen alone. 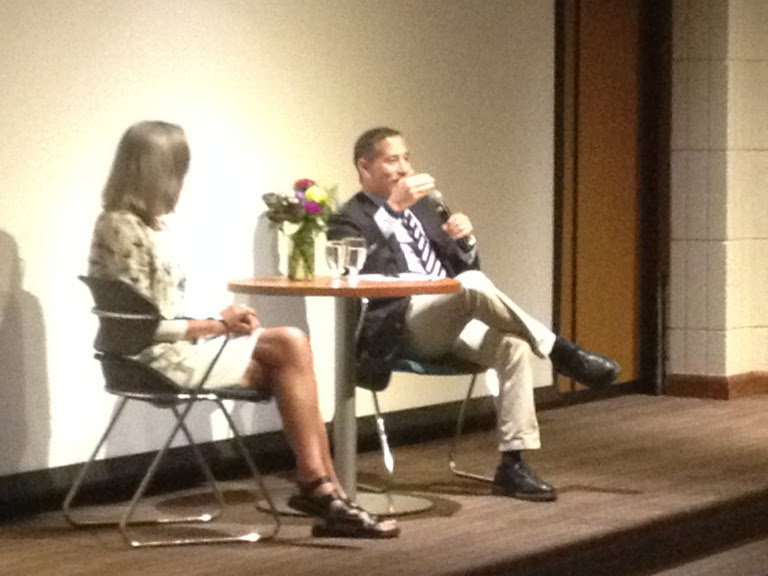 What is more, these groups are constantly adopting different revenue sources (e.g., smuggling, taxation of goods, oil and natural gas, extortion, arms sales, child and adult slavery, and more), which make them too decentralized, diversified, and developed to be ousted militarily. Hoffman cited Northern Ireland as a helpful analogy. The way that terrorism was defeated in Northern Ireland, he stated, was through education, economic development, humanitarian aid, infrastructure, peace and reconciliation talks, and a grassroots commitment to nonviolence. There was no way to bomb the conflicting parties into submission.

Related to this point, Hoffman openly criticized Western nations for being unorganized, unmotivated to come up with a grand strategy, and way too impulsive. Whereas groups with the same ideology as ISIS have been formulating their military, political, and cultural plans ever since the wars in Central Asia with the Soviet Union in the 1980s, countries such as the United States behave as if these groups are a loose-knit collection of fanatics who do not act rationally or make decisions in a calculated manner. That could not be farther from the truth. These organizations are flexible, intensely determined to exploit the tactical weaknesses of their opponents, patient beyond belief, and surprisingly adept at using our own legal and moral systems against us.

One reason, for instance, that al-Qaida decided to stop authorizing bombings that kill other Muslims is to appear moderate in comparison to ISIS. Not only do they grow in stature as a more “reasonable” alternative to the psychotic killing sprees of their most immediate competitor, they force the United States to prioritize which group is more dangerous and worthy of contesting with money and arms. The White House, as a result, often appears befuddled, easily provoked into expensive and counter-productive military strikes, and painfully unsure about its long-term strategy. (This is exactly how Vietnam became a 25-year war that cost 50,000 U.S. lives.) 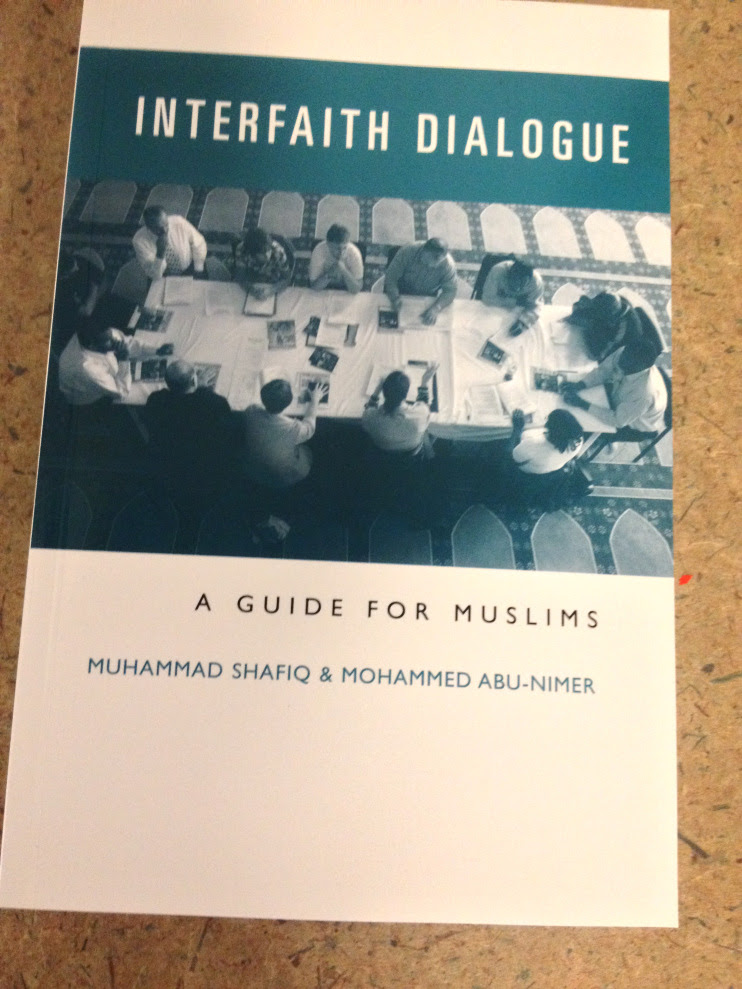 Finally, I heard Hoffman say that, in terms of speed and scale, these terrorist organizations are expanding at shocking rates. Hundreds of Latin Americans have joined, and there are ISIS recruits from Trinidad & Tobago, Egypt, Algeria, Morocco, and all over Africa. Through the use of social media, their global audience is tuned in every single day to every post, every Tweet, and every battle. The pure ease, inter-connectivity, and maximum efficiency in which they communicate with members and recruits is truly frightening.

As Hoffman’s talk went on, it became clear that he is less than optimistic that our current U.S. government will be able to stem the tide. In other words, if the United States is to help thwart this existential attack on life, liberty, and the pursuit of happiness, it will need to be just as cunning and cautious as ISIS. In their farsighted estimation, this has always been a war of attrition. The longer they can protract the “War on Terrorism” (now longer than both world wars combined), the better chance they have of altering and distorting our common way of life. Their goal is to corrupt and erode our system of professed basic values: free speech, freedom of religion, free elections, due process, and a commitment to universal human dignity. According to Hoffman, overreaction to anything that ISIS does will be a mistake that harms institutional trust in liberal democracy. In that respect, we are losing the war terribly.

So just how do we prevent ourselves from becoming evil when our opponent is forcing us to do evil things in order to protect our notion of the good? Bruce Hoffman may be more at home delivering policy talks at the RAND Corporation or lectures to grad students at Georgetown, but that, friends, is a profoundly religious question that was opened up for the entire conference to answer.

George Cassidy Payne is a freelance writer, domestic violence counselor, social justice activist, and adjunct professor of philosophy based in Rochester NY. A member of the Fellowship of Reconciliation, he can be reached at [email protected].

Rethreading the Web: Catherine Keller and the Theology of Entangled Difference: A Report from the Hickey Center’s Annual Sacred Texts and Human Contexts Conference at Nazareth College by George Payne

Community Service thriving at the School Without Walls

East baseball takes the show on the road. Destination Pittsburgh