The Metropolitan: a stellar example of “late modern” commercial architecture

Earlier this summer I had the opportunity to visit my good friend out in Seattle. Shortly after I got back to Rochester I was surprised to learn that we have a special connection to Seattle in the form of the 392 foot Metropolitan, formerly known as Chase Tower (before 2015) and Lincoln Bank (before 1996). The third largest skyscraper in Rochester was designed by the architectural firm, John Graham and Company. John Graham, Jr. (1908-1991) is best known for designing the iconic Space Needle and Westin Hotel, both in the Emerald City.

Today The Metropolitan serves as the upstate New York headquarters of JP Morgan Chase, and is unique for its white vertical fins and the fact that it curves outward on the bottom. The building is another fine example (along with the Xerox Tower and HSBC building) of “late modern” commercial architecture popular in the 1960’s and 1970’s.

All Photographs by George Cassidy Payne

Under construction in the 70s

“Modernism is the single most important new style or philosophy of architecture and design of the 20th century, associated with an analytical approach to the function of buildings, a strictly rational use of (often new) materials, an openness to structural innovation and the elimination of ornament. It has also been called International Modern or International Style, after an exhibition of modernist architecture in America in 1932 by Philip Johnson. Modernism also encompasses Futurism, Constructivism, De Stijl and Bauhaus.”  Modernism

Like typical Modernist constructions, the Metropolitan is distinguished by asymmetrical compositions, the use of general cubic or cylindrical shapes, a flat roof, the use of reinforced concrete, an absence of ornament, and a preference for the color white.

Architecture should speak of its time and place, but yearn for timelessness. – Frank Gehry

“With its distinctive flaring base and soaring white vertical fins, the building was conceived as a cornerstone of an upgrade that would create Clinton Square, a hoped for downtown focal point at the Main Street and Clinton Avenue intersection.

The 14-story building adjacent to the tower called the Clinton Square Building and the seven-story Seneca Building across Clinton Avenue from the tower were later built with the idea of furthering the Clinton Square concept. Yet the designation never gelled as a marker for the area in the way Four Corners has for the intersection of Main and State streets.” Rocwiki

“The structure of the tower is a “tube in tube” design. The concrete core in the center of the building teams with the stiff floor plates and the load-bearing exterior tube of 24 tapering steel columns to provide an iconic silhouette on the skyline as well as very flexible interior space. Twenty Four “non-functioning” external columns are hollow and carry the utilities throughout the building. This structural design results in a column-free interior, best appreciated when visiting the lobby or the bank on the first floor.” rocwiki

This building is also known for its fast elevators. Many people refer to them as “rockets”. They were installed in the 1970s and travel at about 1000 feet per minute. 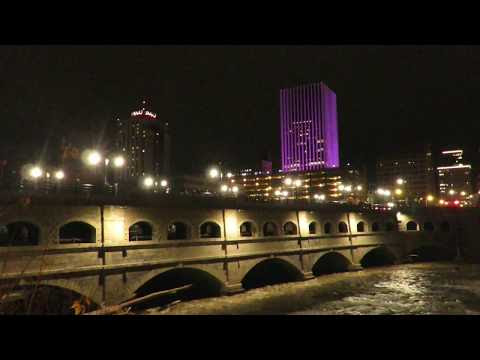 We Are Orlando. And 25 years ago when the RCSD led the nation against discrimination towards gay students

Channeling the Dead at Frontier Field

Architecture as Frozen Music: An Appreciation of Kleinhans Music Hall