Recreation of “Rebel Veterans furl the Stars and Bars for the last time before starting for home” from The Golden Book of the Civil War. “Monroe Wildcats” representing the 1st Tennessee Dismounted Cavalry. Tinker Homestead and Farm Museum 8/6/16 From War

Agrippa Hull, a black Revolutionary War soldier who served in the 1777 Battles of Saratoga (newyorkhistoryblog.org) 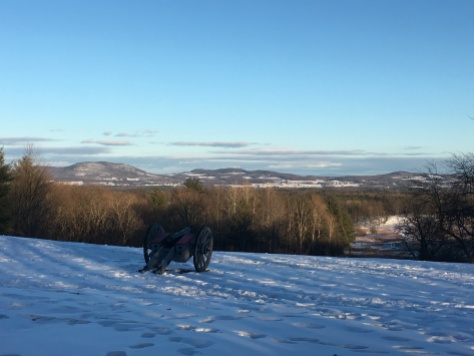 The word Saratoga is shorthand for two battles that gave the coup de grace to the 1777 British invasion from Canada during the American Revolutionary War. 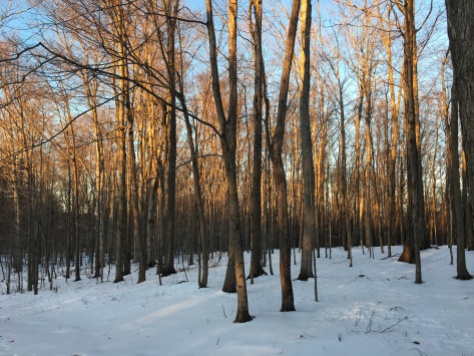 “…one of the Greatest battles that Ever was fought in Amarrca…[sic] ” Major Henry Dearborn “On September 19, 1777, Burgoyne had split up his 7500-man army into three columns to sweep around where he believed the Americans might be. One column of British troops would move west about 2 miles inland and begin to move south. A second column of British troops moved about a mile inland before moving south. The third column, made of German troops, moved along the river road and defended British supplies. About noon on the 19th, scouts from the center column encountered Colonel Daniel Morgan’s American light infantry and riflemen at the farm of John Freeman, a loyalist who had gone north to Fort Edward to meet up with Burgoyne’s army. Thus began the fighting, which grew very fierce, as the battle swayed back and forth, each side taking and retaking the field. As evening drew closer, Burgoyne ordered about 500 German soldiers to move from the river and reinforce the British center column. When the Americans heard and saw them coming, they left the field and returned to their own lines. The British held the field, but were unable to proceed. On September 22, Burgoyne got word from Clinton that he could send troops north from New York City at any time. Burgoyne expected assistance, and ordered his troops to dig in and await it. By the first days of October, Clinton’s men had moved northward, capturing a few American forts. Part of their number also attacked Kingston, and a small number got about 30 miles south of Albany. By mid-October, Howe had ordered Clinton back to New York City to supply reinforcements for Philadelphia. Clinton had to turn away. Burgoyne’s army grew short on time, supplies, and manpower; their now 6800-man army had been on half-rations for the last two weeks, and winter wasn’t far away. On October 7, he sent out a 1500-man “reconaissance-in-force” with several cannons to probe and bombard the American left. The group was delayed in the Barber Wheatfield, as some of the soldiers were tasked with harvesting the much-needed ripened wheat. Around mid-afternoon, the Americans, aware of the British movement, attacked. Their now 13000-man army was able to push the British back. As the British withdrew, one of their beloved Generals, Simon Fraser, was mortally wounded by one or more of Morgan’s riflemen. British forces hastily fell back to one of their defensive positions, the Balcarres Redoubt. It was strong, well defended, and able to deter the Americans. Several hundred yards north, the Breymann Redoubt was not as well suited to the defense. It was also defended by less than 200 German soldiers and officers –no match for the nearly 1300 American soldiers attacking it. As some of the American troops began to circle around the left side of the Breymann Redoubt, American General Benedict Arnold arrived on the scene. Caught up in the flow of American soldiers, he rallied the men, and was seriously wounded in the left leg. By nightfall, the Americans held the Breymann Redoubt. As it was at the far right of the British lines, they could then get behind the British anywhere else from behind. They did not press the advantage, but the British still fell back to their own river fortifications, the Great Redoubt. Simon Fraser having been buried in the Great Redoubt the morning of October 8, and having packed up what supplies they could, Burgoyne’s army began a hasty retreat north. They trudged through cold rain, mud, and hunger until reaching the village of Saratoga. Finding themselves boxed in by American militia soldiers north, west, and east of the village, they set up a fortified camp and waited. Two days later, the Americans had completely surrounded them.” https://www.nps.gov/sara/learn/historyculture/index.htm

When the Americans beat their British foes at Saratoga, it marked the first time in world history that a British Army ever surrendered.One American soldier declared, “It was a glorious sight to see the haughty Brittons march out & surrender their arms to an army which but a little before they despised and called paltroons.” 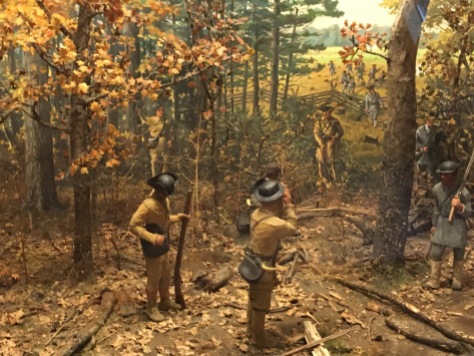 Life of a Revolutionary Soldier “Although many Americans turned up from miles away to fight the British, the Continental Army had continual trouble keeping its enlistment up. In times of need, the army might resort to recruiting slaves, pardoned criminals, British deserters, and prisoners of war. The lack of enthusiasm for enlisting occurred for a number of reasons. The colonists’ previous experience with a regular army was that with the British, who were not very well liked, as the Boston Massacre had shown. Farmers did not want to leave their fields untended for long periods of time. States competed with the Continental Congress to keep men in the militia. The pay was low and uncertain, especially in a period of inflation. No pension system existed to compensate a soldier or his family for injuries or deaths in the line of duty. Life as a soldier was not very pleasant, either. Disease was common; it would often spread through entire camps. The soldiers often slept under the stars, or when they did have tents, the soldiers might not have a blanket. They sometimes awakened from a night of sleeping only in their summer clothing and would see frost on the ground. Food was frequently scarce. Salt and other seasonings were amenities soldiers would almost always do without. When there was no food at all, soldiers went hungry for days at a time before finding turnips, nuts, or other subsistence. When soldiers did receive real beef or other meats, they rarely had cooking utensils to use. Nevertheless, raw meat was preferable to nothing at all. It is a wonder that the American side won the war at all. “ https://www.saratoga.org/tourism/battle-of-saratoga/ 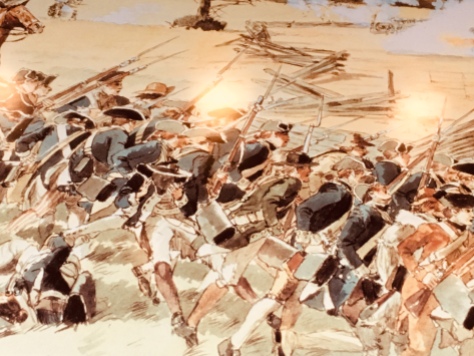 “With the American victory, later, the Spanish and Dutch entered the fray. This multi-national alliance turned a civil uprising for the British into a world war, as they would have to then fight not only in North America, but in the Caribbean Sea, the Mediterranean Sea, North Africa, South Africa, and India –among other places. Because of the incredible impact caused by the American victory in the Battles of Saratoga, they are known as the “Turning Point of the American Revolution”, and are considered by many historians to be among the top 15 battles in world history. “https://www.nps.gov/sara/learn/historyculture/index.htm 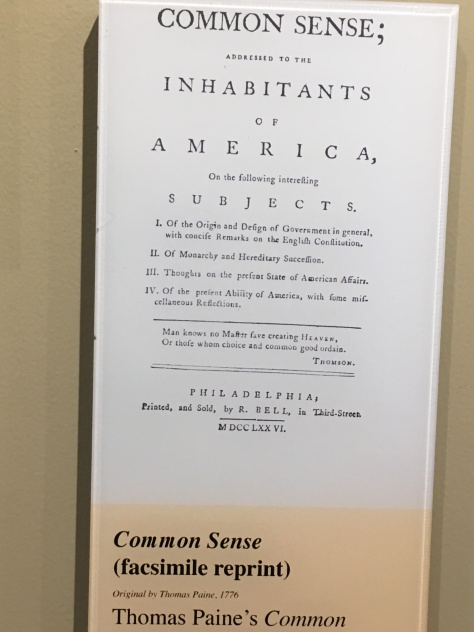 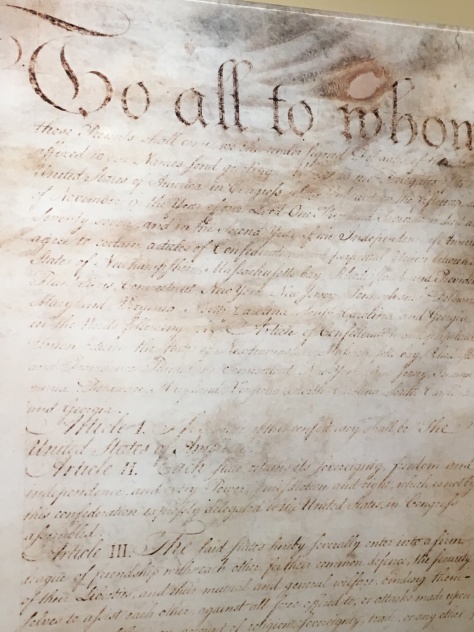 To celebrate the American victory at Saratoga, the Continental Congress issued a proclamation for a national day “for solemn Thanksgiving and praise,” the first official holiday observance with that name. 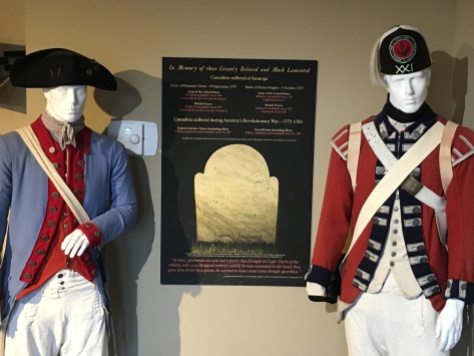 A Museum is Born“Through the 19th and early 20th centuries, different individuals and organizations attempted to preserve the memory of the events of 1777. The Saratoga Monument was completed in the Village of Victory in 1882, commemorating the campaign and American triumph. Nineteen twenty six, with the sesquicentennial of the Battles approaching, saw the preservation of the Saratoga Battlefield under the aegis of New York State. The following year, over 160,000 people visited the newly established park. They viewed great pageant with a cast of thousands held on the fields in Stillwater and visited the 1777 home of John Neilson and a newly constructed “Blockhouse” museum. With improved roads, and a staff of guides at the museum, Saratoga Battlefield became a popular site to visit. National figures such as Admiral Richard E. Byrd, foreign dignitaries and descendants of many who fought at Saratoga, visited over the years. One particularly interested visitor was Franklin Delano Roosevelt, Governor of New York State and later, President. During his term as governor, Roosevelt conducted guided tours for governors of five states that were his guests in New York.” https://www.saratoga.org/tourism/battle-of-saratoga/

The Civil War Veterans’ monument in Mount Hope Cemetery was erected in September 1908, and unveiled on September 25 of that year. Statues of two soldiers stand atop a granite base. The older soldier holds a flag. The younger one holds a bugle. The bronze plaque on the base reads “1861 -1865. On Fame’s eternal camping ground/ Their silent tents are spread, /And glory guards with solemn round/ The bivouac of the dead.” The music for the verse completes the plaque. 6/18/18 From War

The Terquasquicentennial of the Day of Wrath and the Great Disappointment atop Cobb’s Hill. Are the ascension robes a myth?