School segregation and some satire 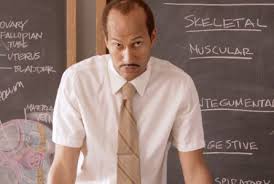 As was well documented in today’s front page D & C, article “Schools in black and white,” many city and suburban are deeply segregated.   As I travel around city schools, I experience segregated education first hand. On a daily basis, I may walk into a class where I am the only white person in room of minority, mostly black, students.

Naturally, my first task is to take attendance. When I first started, I would invariably mangle the pronunciation of my minority and foreign-born students, often to titters or outright laughter. Particularly embarrassing is calling a name, and then asking “Is he here?,” only to learn he is a she (or vice versa). Luckily, I have greatly improved.

Recently, I saw a satirical video about an African-American urban teacher substituting in an all white (apparently) suburban school. When calling roll, the teacher pronounces Anglo names as if they were African-American. Convinced the students are being deliberately challenging, he erupts in hyperbolic anger overdone for comic effect.

Later, in passing, I mentioned the video to some high school students. Somewhat to my surprise, another teacher had already shown it to them. So we watched it again with the same amused response.

Often satire can be telling.

Take a look at Kay and Peel’s “Substitute Teacher”

Clearly the video plays on a kind of role reversal. The black teacher in the all white class. The mispronouncing of African-American and Anglo names may seem minor or trivial. Behind the humor, however, I think the video allows us to see in a crystallized form the effects of segregation.

Both the black teacher and the white students seem to live in separate worlds where lack of knowledge of others, misconceptions, and stereotypes abound. The video does offer a tiny ray of hope when we meet the only African-American student in the class. But he is just one. Alas, segregated education allows allows the world of the video to be all too real.

Holocaust survivors tell their stories at the School Without Walls

The Rochester Baha’i Center Welcomes the Public to a Street Art Film Screening: “Changing the World One Wall at a Time” and Shares a Universal Aim by Shadi